In Foundation Stage we have been learning about Pirates. We were hooked into learning through our new ‘Night Pirates’ role play areas which stimulated the learning. Throughout the week we have been on a range of pirate adventures. We made treasure maps, drew pirate pictures, constructed our own pirate ships, completed critical thinking challenges, created our own pirate adventure stories and had a pirate day to end the week.

During pirate day we all dressed up as pirates and made a huge effort with our costumes. The reception children took the nursery children on a treasure hunt. They showed the children their treasure maps they had created during the week and applied positional and directional language they learned throughout the week to lead the children to the treasure. Each child found pirate chocolate coins, which we placed in a treasure chest then shared out amongst the children. During the afternoon we had a pirate fun afternoon. We completed a range of activities including: walk the plank, hoy the hook, crate stacking races, pin the patch on the pirate and had a treasure chest pinata. We had so much fun and even had a big surprise! Jake from the Neverland Pirates came to our party as a surprise, he enjoyed our fun activities.

Pirate week has been a fantastic learning opportunity for the children and would not have been possible without the hard work and dedication of the staff so I would like to say a huge thank you. Also the PTFA arranged and paid for Jake to surprise the children, a massive thank you as this was hugely appreciated by staff, children and parents. Thank you to everyone who contributed to pirate week, you all made it an extremely special and memorable experience for the children. 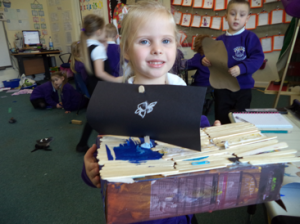 We have been constructing our own pirate ships using junk materials and decorating them using a range of media and materials. “Mine is sailing with its skull and cross bones sail” Ava explained. 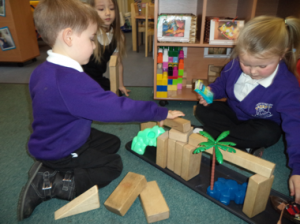 We have developed our perseverance skills through a critical thinking challenge. We had to build a structure so the pirate could walk over the shark pool to reach the treasure in the cave. This was very challenging as the blocks were collapsing and it took a lot of trial and error working out the position and lengths of the blocks. However, we persevered and the pirate reached his treasure. 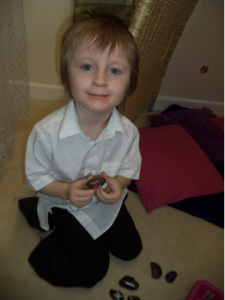 We created our own pirate adventure stories through the use of pirate story stones. “The pirate found a treasure map with x marks the spot so he sailed in his pirate ship to the treasure island” explained Oliver. 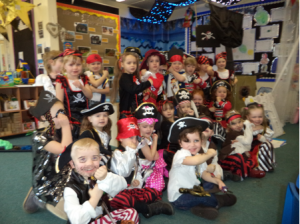 We loved dressing up as pirates and had mastered our pirate growls. 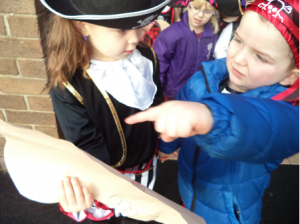 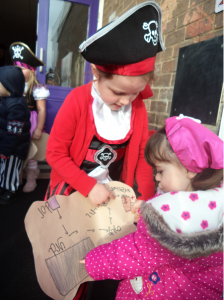 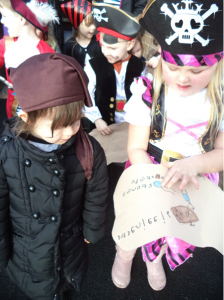 “We need to go across the water” explained Millie. 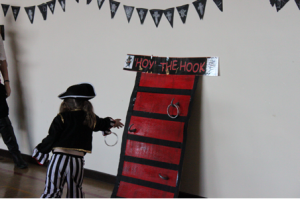 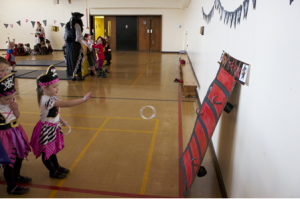 Hoy the hook was tricky but we persevered. 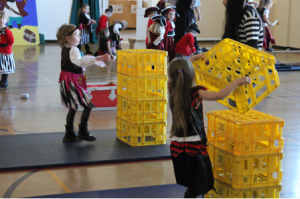 We had a race to stack the crates. 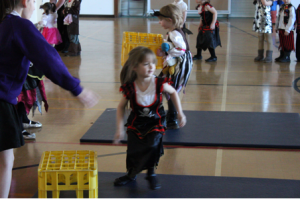 We had to move fast to beat the other competetor. 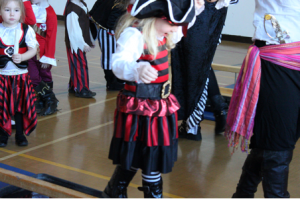 Walk the plank was scary! 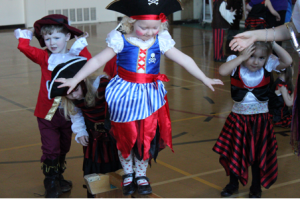 Some of us were very daring and walked without holding hands. 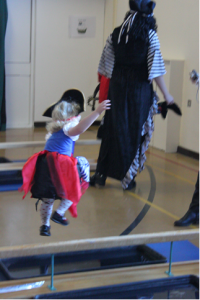 Oh no! Careful not to fall into the water! 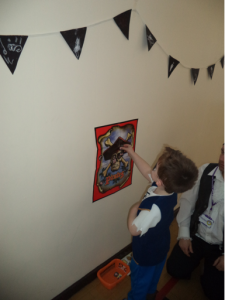 Pin the patch on the pirate. 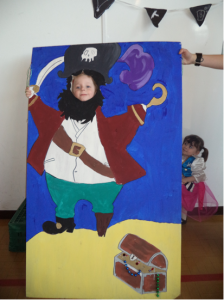 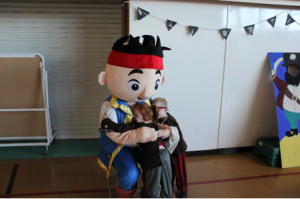 We could not believe Jake had come all the way from Neverland for our pirate fun afternoon! 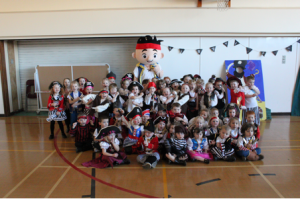 FacebookTwitterLinkedInRedditTumblrPinterestVkEmail
We use cookies to ensure that we give you the best experience on our website. If you continue to use this site we will assume that you are happy with it.Ok